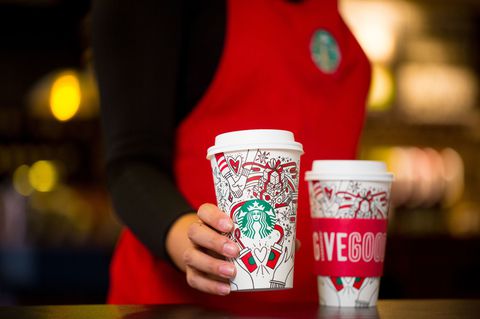 Rather than unleashing another new holiday drink or snowman or reindeer-shaped treat, Starbucks has got a whole new incentive to get people through its doors all season long. For coffee lovers, it’ll be even more exciting than a baby blue and Pepto-pink unicorn Frapp, too.

The chain’s arming its baristas with 50,000 $20 gift cards — roughly $1 million — instructing them to give them away to shoppers throughout December. Starbucks hasn’t revealed where and when these giveaways will take place — only that its “Give Good” squads of baristas will be handing them out in stores and at “community celebrations” across the country. (Psst … look for employees in red and green Starbucks aprons.)

Also, starting Tuesday, Dec. 5, the company will bring back its Starbucks For Life sweepstakes, where you can win free coffee for a week, month, year, or lifetime, as well as other prizes.

As if that weren’t enough, the brand announced that anyone who uses its mobile app or a registered Starbucks card in December will automatically get upgraded to gold status, which earns them free coffee refills while they’re sipping in-store (perfect for students pulling an all-day shift working on that final). Oh, and you score free drinks and food after making a certain number of purchases.

Considering Starbucks Rewards members accounted for 36 percent of sales last quarter, making it easier for people to get gold status — and giving away free gift cards, thus encouraging new members — could be a huge way to boost sales through the end of the year.