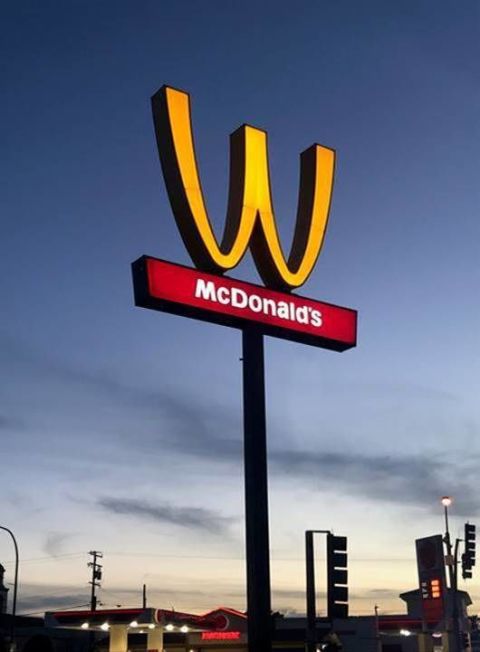 First came the buzz, then came the backlash. McDonald’s made headlines nationwide when photos emerged of its iconic golden arches flipped upside down at a restaurant in Lynwood, CA. At first, it seemed like a practical joke: Did Wendy’s go all senior prank on Mickey D’s? Is it the real-life interpretation of McDowell’s from Coming To America? Is it an actual senior prank?!

McDonald’s soon announced it was the first of a series of temporary changes in honor of International Women’s Day. The logo change — upending the arches to turn the “M” into a “W” — was put in effect across social media and on the uniforms and packaging at 100 stores across the country. While it was intended to celebrate “the extraordinary accomplishments of women everywhere and especially in our restaurants” — as the brand’s global diversity officer Wendy Lewis wrote on Medium — many people questioned just what, exactly, the gesture was achieving.

“Hey @McDonalds, maybe instead of a cheap PR stunt where you make the M a W to ‘support’ women, you do something real — like paying your workers a living wage,” tweeted Democratic Coalition Executive Director Nathan Lerner. He was far from the only one criticizing the move:

Though it was nice gestures, I can’t imagine I’ll be teaching about the Third Wave of Feminism was finally fulfilled when McDonald’s flipped its logo and KFC revealed a female Colonel. https://t.co/KYrAqrcRhI

Others also questioned why McDonald’s wasn’t making any sweeping changes to its parental leave plans, if the organization really wants to support women. When asked about these concerns, a McDonald’s spokesperson noted that more than 90 percent of the chain’s restaurants are independently owned and operated, and that those owners set their own policies, wages, and benefits. For U.S.-based staff employees at corporate-owned restaurants, McDonald’s offers two weeks of paid time off for new parents and 10 weeks of maternity leave. She also noted that these benefits apply to managers and full-time/benefits-eligible part-time employees.

“We recently enhanced a number of employee benefits including an increase in our maternity and paternity leave policy for Corporate and company-owned restaurant and McDonald’s provides tuition assistance, academic advising services, English language courses and more through our Archways to Opportunity program,” the spokesperson added. “We will continue to look for new ways to support employees in the workplace.”

In the Medium essay on the logo change, Lewis acknowledged that there’s still work to be done. “Are we perfect? Of course not,” Lewis wrote. “We know we have work to do and are committed to listening and working with others across business, government and our communities to improve and make stories like Yazmin’s [a part-time employee who became a manager] in particular the norm, not the exception.”