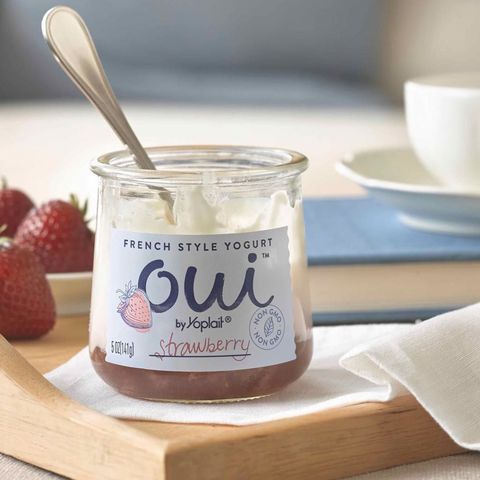 America has the weirdest on-again off again relationship when it comes to yogurt. Whether it’s Go-gurt, Greek yogurt, or fro-yo, the country’s opinion fluctuates more rapidly than the weather. And so, to revive declining sales in the category, dairy brands have been rejiggering their lineups and introducing new concepts, introducing everything from whipped mousse Greek yogurt to 100-calorie parfait cups.

But now we’re about to welcome a totally new kind of yogurt to the American market. Part of an endeavor to create the hottest new thing in the refrigerated aisle, Yoplait has created a totally new “French-style” yogurt called Oui (that means “yes” in French). It’s considered a nod to the company’s French roots, though the exact definition of French-style yogurt remains to be determined.

This new variety is inspired by one of Yoplait’s “heritage” recipes called “Saveur d’Autrefois,” which roughly translates to “taste of yesteryear.” It calls for only whole milk, yogurt cultures, and the real fruit included at the bottom. But what most separates this new style of yogurt from what we’re used to seeing Stateside is how it’s made: Each portion is cultured in the glass container it’s sold in, which gives it a unique texture and voids any need for additional additives.

At $1.49 a pop, this spin on yogurt is a little more expensive than its traditional counterparts, but at least you get to keep (and reuse) those cute little glass containers. Yoplait plans to release eight flavors — including plain, vanilla, lemon, strawberry, blueberry, peach, coconut, and black cherry — each of which boasts less than eight ingredients and zero artificial flavors. Find it on store shelves in early July.