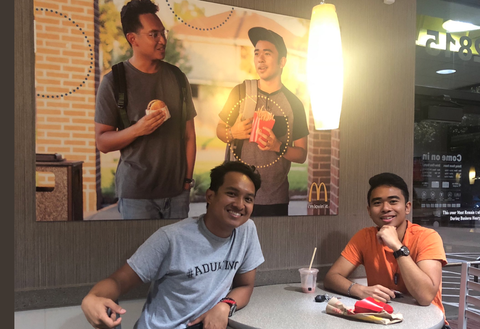 Jevh (Jehv) Maravilla, a 21-year-old student at University of Texas, was dining in a McDonald’s when he and his friend realized that none of the chain’s posters that were hanging included any people of Asian descent. So, he took matters into his own hands. Jevh and his buddy, Christian Toledo, made a fake McDonald’s poster and hung it in the restaurant, USA Today reports.

On Sunday, Jevh tweeted: “i noticed there was a blank wall at mcdonald’s so i decided to make this fake poster of me and my friend. It’s now been 51 days since i hung it up”, and included photos of the poster.

i noticed there was a blank wall at mcdonald’s so i decided to make this fake poster of me and my friend. It’s now been 51 days since i hung it up. pic.twitter.com/5OTf5aR4vm

Per USA Today, Jevh says, “They had other races but no Asians so we felt like it was our duty to put ourselves up there.” He and his friend Christian Toledo, 25, are both Filipino-Americans, per Click 2 Houston.

They took a photo of the themselves holding food from McDonald’s, and then edited the picture to look like the other posters in the restaurant. “That’s why we created the circles, we tried to get the same color palette and tried to make the printing really good as well,” Christian told Click 2 Houston.

The friends bought a poster from Office Depot, and then headed to Goodwill for a McDonald’s shirt, which they found for just $7. On July 13, wearing the red shirt, a badge, tie, and walkie talkie, Jevh hung the poster with the help of his friends.

Jevh’s tweet about the poster has gone viral since Sunday, with more than 200,000 retweets. He told Click 2 Houston, “I hope this can open the eyes of McDonald’s and their corporation to show more people like me, Asians, in there.”

According to Click 2 Houston, the McDonald’s franchisee released a statement — “We take pride in highlighting diversity in every aspect of our restaurants. We applaud these students’ creativity and hope to see them in our restaurants again soon.”

Jevh explains the whole process in this video:

Props to these guys for tackling an important issue in a creative way!