The Most Ridiculous Things People Have Cooked While Drunk 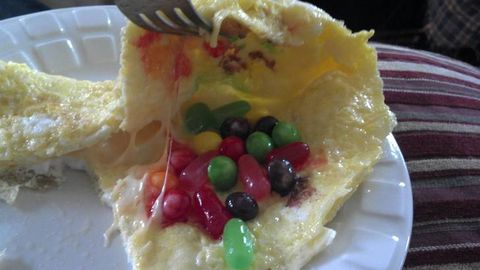 A case of the drunchies sends most people straight into the loving arms — nay, arches — of McDonald’s. But for some turnt souls, a little booze provides just the boost of confidence necessary to try things in the kitchen they’d never dare to when sober. Here are their greatest achievements.

A more bland combo — say, a Golden Oreo and plain hummus — would have been less offensive, but dipping a Cinnamon Bun Oreo into Sriracha hummus is downright disrespectful to both parties involved.

At first glance, this looks like a delicious breakfast burrito. But take a closer look, and you’ll see that yellow mass isn’t scrambled eggs. It’s actually cheesy, over-mashed potatoes about to be wrapped in a tortilla with bacon.

It takes talent — the kind only a hammered person could have — to screw up something as simple frozen pizza.

It’s not that SpaghettiOs are an unusual drunk food; it’s that this enterprising soul tried to open the can with a hammer and screwdriver instead of this crazy-cool invention called a can opener.

Candy eggs are nothing new. In fact, we love them. But foods of that color and texture do not belong inside an omelette .

When the fridge and pantry are not stocked for a proper grilled cheese, the best drunk chefs know how to improvise. Enter: this Goldfish-cracker-and-string-cheese combo.

7. How The Sausage Is Made

No bread, no buns, no problem. There’s never a time when a hunk of cheese is not the solution to life’s troubles.

We love a good pasta hack as much as the next person, but dropping uncooked bowties into a heated appliance sounds like a 911 call in the making.

As if green bean casserole wasn’t contentious enough, this brave chef decided to top it with Cheerios — which ironically would have made a perfectly fine drunk snack on their own.

Pizza = delicious, and cookies = delicious, but pizza + cookies = huh? To be fair, it’s Digiorno’s fault; that packaging is confusing AF for someone four drinks in.

This needs no more commentary than what the Reddit user wrote: “Peanut butter and jelly pasta, with Ritz crackers to make it classy.”

12. Always A Sandwich, Never A Hero

In the wee hours of the morning, an egg sandwich seems clutch — except when all it consists of is soggy white bread smothered in mustard and topped with a couple mangled, over-easy eggs.

Why pay $20 for a meat, cheese, and crackers platter at a five-star spot, when you can make the same appetizer — albeit with ingredients from a 7-year-old’s lunchbox — at home in your toaster oven?

This is one Redditor’s response to grief plus tequila: a truly inventive riff on nachos, consisting of Cheetos, mayo, barbecue sauce, and shredded cheese. We fully expect to see this on the menu of a Texas food truck next week.